Tall green tress, clouds touching the skies, rives with rapid currents, deep canyons, that’s what Kashmir is about. If you want to experience Kashmir, you must complete the great lakes circuit trek, says Satish Kumar.

The first two days of the Great Lakes trek in Kashmir, we spent trekking from Sonamarg to Nichnai to Vishnsar. The next day we started our journey from Vishnsar to Gadsar pass (13,750 feet above sea level) which is the highest point of the trek. After we climbed this pass we were able to see the Kishansar lake. The water in the lake was so pure and very beautiful like the Dal Lake. This location would make a magnificent sight for landscape photographs.

It was a great experience seeing the two lakes and walking along them. From here we started singing Kashmiri songs and moved towards the Gadsar Lake. Since our guide and potters were Kashmiri, they taught us some Kashmiri songs. There were a lot of beautiful flowers surrounding the Gadsar Lake. Though there are other smaller lakes that we passed along, but Gadsar Lake has its own beauty. First we came across a small lake known as Yamasar Lake. If is a belief that there is a relation between Yama (God of death in Hindu mythology) and this lake. After crossing this we came across another small lake. Later after crossing the lakes, we needed to cross two small canals to reach our camp site. I removed my boots and prayed to God that I would have no problem walking over these cold canals. As soon as I stepped my foot in the cold water, my legs felt almost paralyzed. I still cannot believe that I was able to cross over the canals without much difficulty. After we reached our camp site, we played cricket though the evening was very cold and foggy. 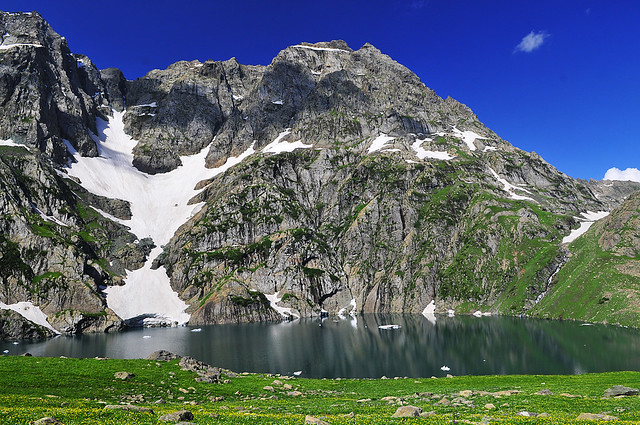 The people who were not able to cross the canals on foot, they sat on back of the horses which rode them across to the other side. The next day we stared to trek again and stopped at a place called Rasbal for lunch. Since the atmosphere was very foggy and windy we were in a dilemma to call it a day or to continue trekking. At last we decided to call it a day off and spent the time singing and dancing. The weather the next day was good. We started our trek and reached the Mongan Dhob. The trek to here was steep and  the older people in the group had some trouble here. Even I was scared seeing how steep the trek was over here, but gradually I lost my fear and gained courage. Then we reached Jab Pass. The altitude of this pass was about 13,500 feet. From this pass we were able to see Gangbal, Nandkol and Satsar Lakes. Also you could see Mt.Harmukh from here. We had our food at this place though it was raining fog. Later in the night our guide organized a camp fire to keep ourselves warm and few enthusiastic people spent the night singing and dancing, but I chose to sleep. 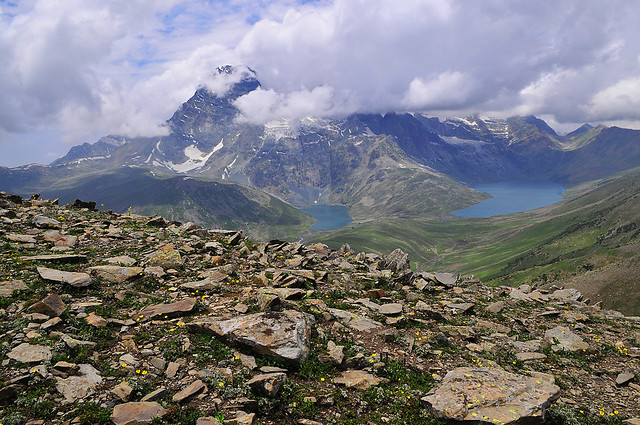 On the last day of the trek, our guide requested us to share their experiences with the other members. Later on we were handed over our trekking certificates. From Gangbal we started climbing down for three hours, we went to a place known as Sarnag where our trek ended successfully. Our organizers gave us words of thanks and treated us with a buffet of Kashmiri dishes. I had a great experience during these seven days which I would cherish through out my life. I took a taxi back to Srinagar and the next day a flight back to home.

This travelogue was written by Satish Kumar who works as a software programmer for a multi national company in Hyderabad. He is an avid traveler and has almost traveled to all parts of India. He has a passion for trekking and like to share his travel experience.